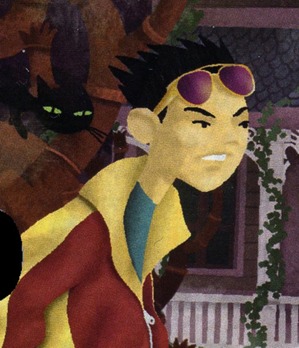 WELCOME TO THE CODE BUSTERS CLUB

Code Name: “Lock&Key”
Description:
Hair: Black, spiky
Eyes: Brown
Other: Sunglasses
Special Skill: Video games, Computers, Guitar
Message Center: Doghouse
Career Plan: CIA cryptographer or Video game designer
Code Specialties: Military code, Computer codes
Hey, I’m Quinn. I started the Code Busters Club ‘cause I like doing puzzles and codes
and stuff. I’m good at math, probably because my parents are math professors at the
University of California, Berkeley. I live across the street from Cody, who’s new to the
club this year. But she’s cool.
I like designing video games for the other club members to play, especially ones that
have zombies. I also like to create new codes for them to solve. And lately I’ve been
getting into origami—that’s paper folding. I like to fold the messages I write into cool
designs.
That’s about it for me.  Gotta go.
View on Mobile