WELCOME TO THE CODE BUSTERS CLUB 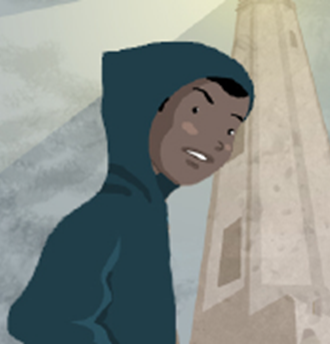 Home
Code Name: “Kuel-Dude”
Description:
Hair: Black, curly
Eyes: Dark brown
Other: Saints cap
Special Skill: Extreme sports, Skateboard, Crosswords
Message Center: Under porch step
Career Plan: Pro skater, Stunt man, Race car driver
Code Specialties: Word puzzles, Skater slang
Yeah, I’m Luke LaVeau. I made up the nickname, “Kuel-Dude” from my name
—“Kuel” is an anagram of “Luke.” Plus it sounds cool. I used to live in New Orleans,
until the hurricane came. I don’t like to talk about that much, but I still have my
New Orleans Saints hat.
I’m pretty athletic. I like to skateboard, play basketball, football, do parkour, which
is climbing up buildings and going around obstacles, just for the fun of it. Nothing
scares me much, not after that hurricane—except girls. I don’t have them figured
out yet.
The kids in the club tease me about my accent. They say I talk funny and say “Y’all,”
instead of “You guys,” but I don’t mind. I live with my grand-mere and she was
from Louisiana too. She’s always teaching me stuff like how to make home-made
remedies. I think she was a voodoo queen a long time ago, but she won’t admit it.
Anyway, enough about me. I’d rather be outside doing something than indoors
writing. Later, dudes.
View on Mobile